An unique feature developed by Innosyn is based on the sustainable use of Ruthenium: upon addition of a base and a very simple ligand (ethylamino phosphine), the metathesis catalyst is transformed in situ into an efficient ester hydrogenation catalysts. 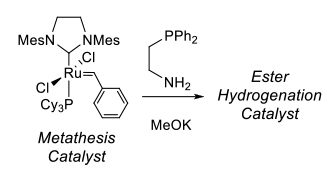 This tandem procedure was demonstrated to be useful for the preparation of the fragrance Mefrosol.